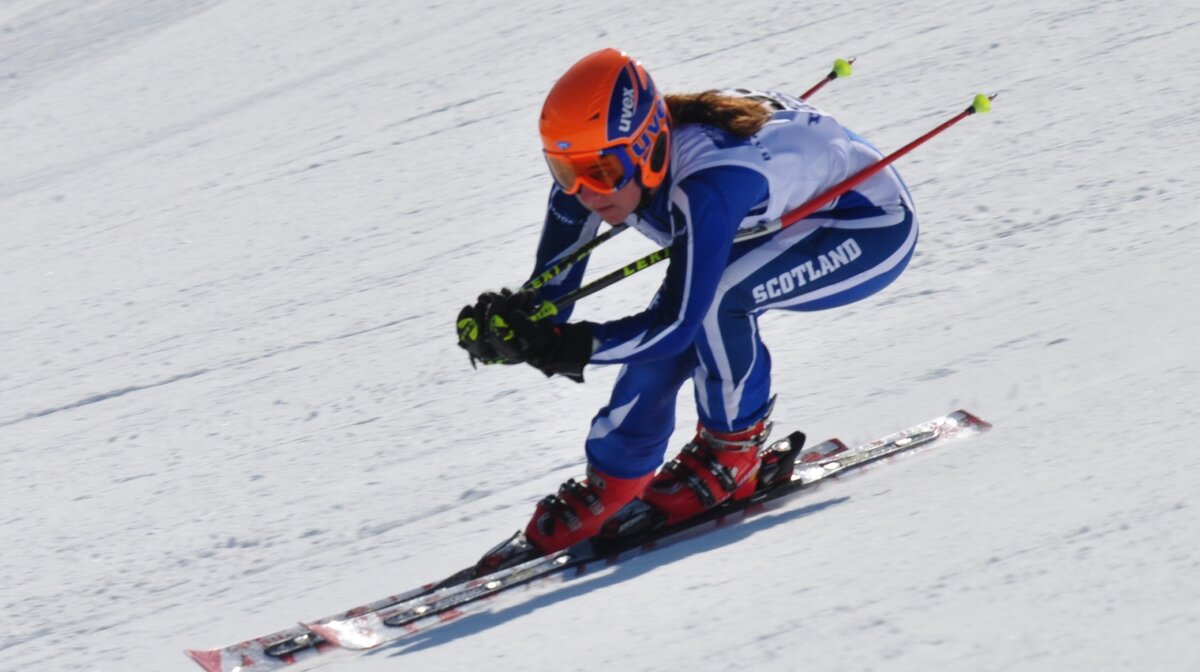 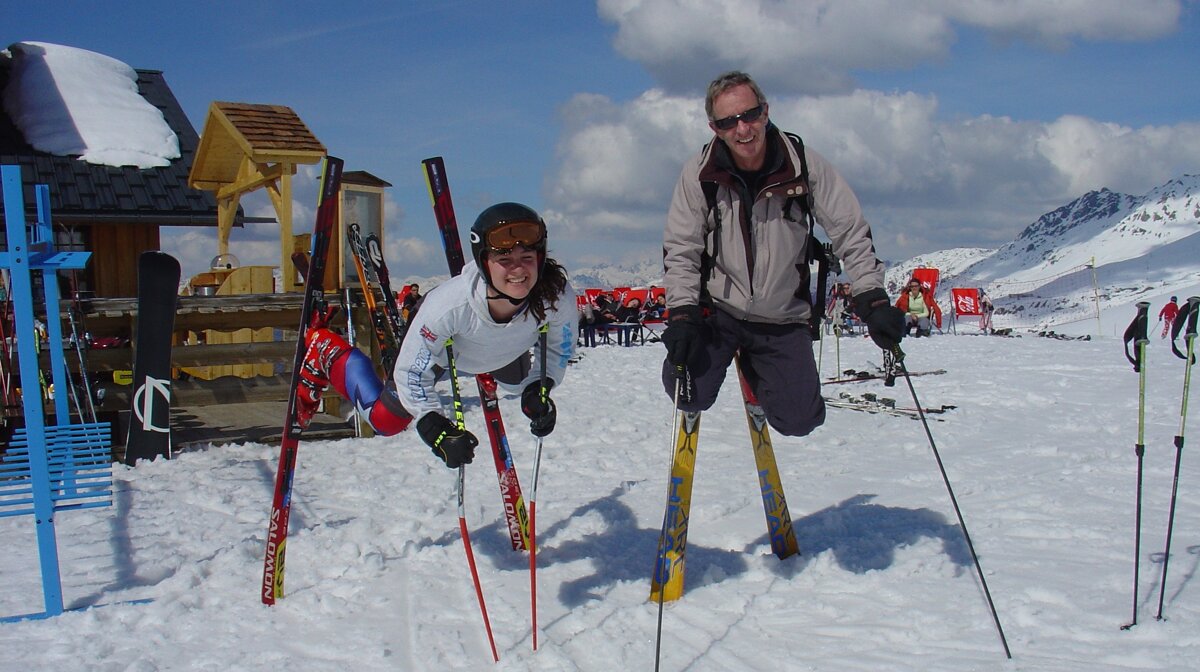 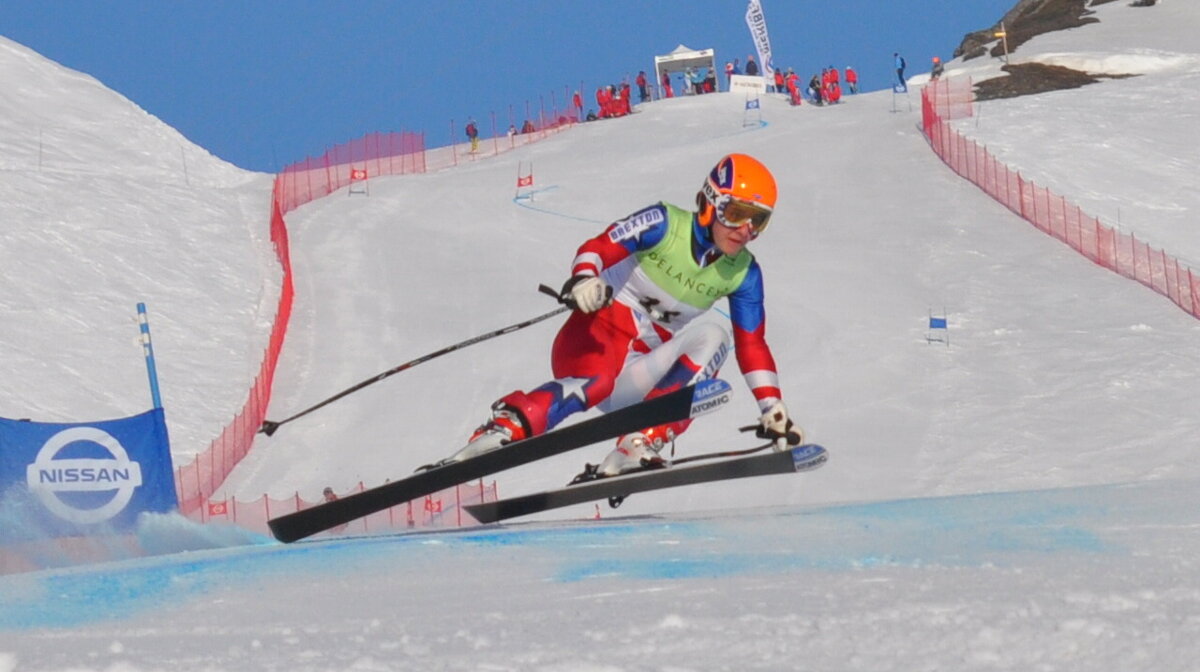 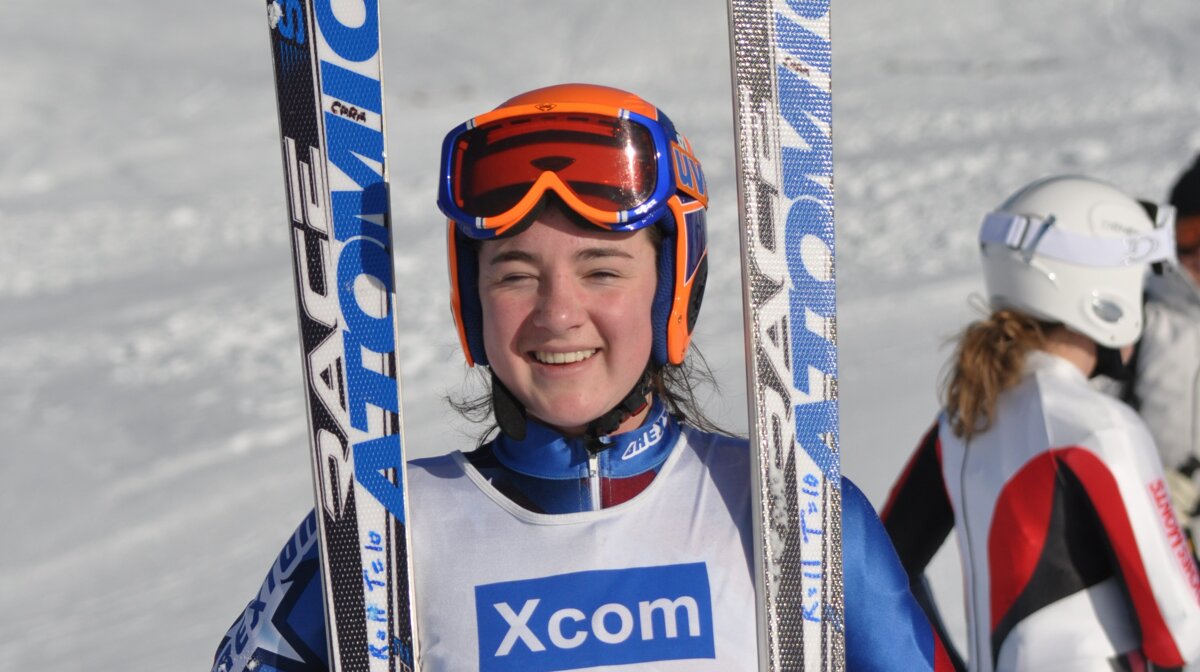 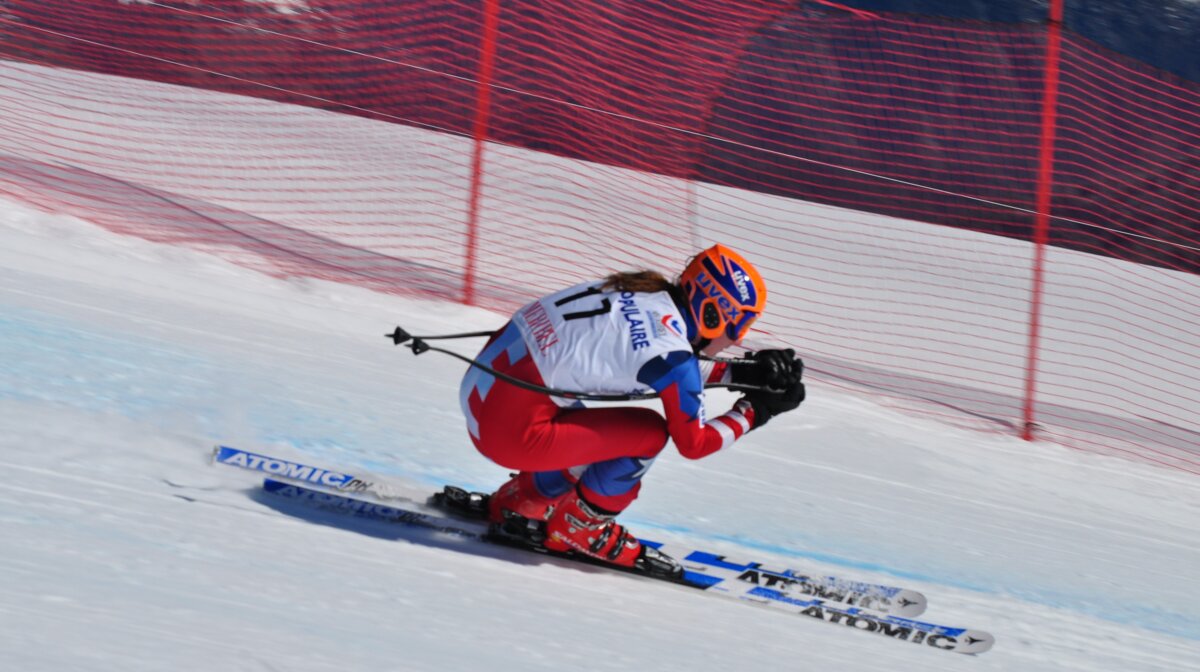 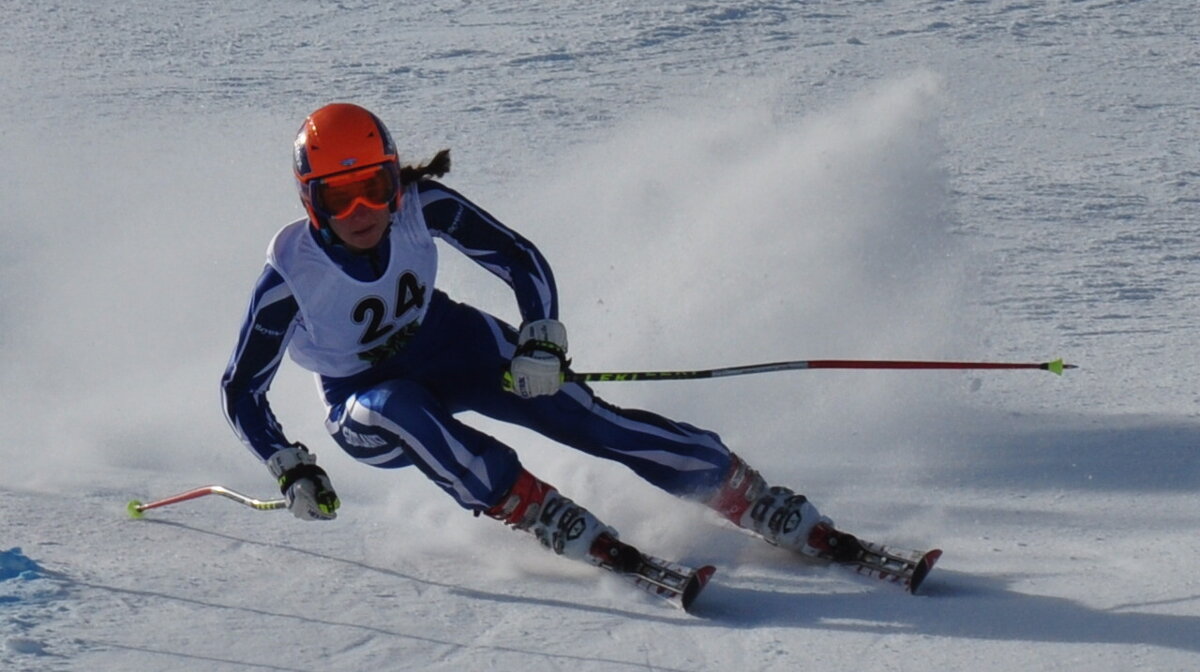 Most people's experience of ski racing is watching all the latest thrills and spills on Slalom, Giant slalom and Super giant slalom (Super G). If I’m lucky I also manage to get the downhill skis out for a few races! Going from slalom to downhill the turns gradually get bigger and bigger. Slalom radius turns are usually around 10m whilst downhill gates can be 40m apart.

How much training do you do and is it any fun or just a hard slog?!

I have days where I hate training and I wonder what on earth I am doing. You get up early in the morning and ski until lunchtime and then you’re down the hill and into the gym for a few hours before sharpening your edges and waxing your skis to be ready for the next day. My winter season goes from November to April and my summer one from July to September so it’s pretty full time. Even though the training is tough the enjoyment I get from skiing means it pays off.

What motivates you each season / throughout the year?

The enjoyment that I get from skiing is what motivates me, when you see yourself improving in training and then you manage to get a good result in a race that’s really the feeling that spurs you on. There’s a whole lifestyle around being a ski racer. You get to meet loads of great people all interested in the same things as you and when I wake up every morning knowing that I’m off skiing, I wouldn’t have it any other way.

What's the best thing about racing?

The best thing has to be the speed! You get such an adrenaline rush. I love it when I’m skiing and I don’t have to think about anything, I’m completely on my own and all I hear is the wind and my skis in the snow.  Some people go on holiday to get away from everything; I throw myself down a hill at 60mph!

And the hardest thing about doing what you do?

My journey in skiing is so up and down. One day you’ll be skiing your best and the next day you might be having the worst day ever! It’s also so intense, you can’t just take a month off, you have to keep training on the hill and in the gym. Also the early mornings… and the cold… and sore feet… and aching legs…

What's your biggest achievement to date?

My biggest achievement has to be at the British Championships in Meribel last April. I won the Non- British Team Cup in the Giant Slalom race. I placed 5th overall and scored my best points of the season.

And your plans for the future?

I’m looking towards the 2018 Winter Olympics in Seoul. I have a plan of how I’m going to get there, by moving up through European Cup, World cup and events such as World Juniors. By the end of this season I want to have reached a good enough level to consider entering some European Cup races. I’m taking each day as it comes, as long as my body and mind hold out I’ll still be fighting for the gold.

Where has been your favourite place to visit in the world so far for racing and why?

My favourite place to ski in the whole world has to be in Meribel. It was one of the first places I ever came as a kid and I have very fond memories of skiing here. The ski area is so huge and just endless! Meribel, as a town, has such a fun vibe about it as well, there’s always something happening.

You train and compete all over the Alps.. Name the things you like best about:

My favourite summer training spot! Always good snow, a train (with seats) to get up to the Glacier, there’s really quick turn around on the T-bars so you can fit in loads of runs. There’s a brand new sports centre in town, loads of beach volleyball courts, football pitches and huge slides into the lake…

The ice car racing at the start of the season is worth going for a watch. Also because it’s high up it always gets a good dump of snow and opens earlier than most other resorts.

Courchevel has a really good race piste, it hosts the Scottish Championship races at the end of the season. Also, the café with the ice sculptures on the piste does amazing hot chocolates!

I love racing in Les Gets. The first time I raced there was in an international Race and I placed 3rd after the first run, unfortunately I fell on the second run but I still always have high hopes every time I go back and race there…

How long is a ski racers career.. if you're 19 now when do you expect to retire?

Ski racers usually last quite a while! Most Olympians don’t medal until their late twenties and can keep going until around 32. So I still have a few years to go. Unfortunately skiing comes as a package deal with possible injuries. I have been lucky enough to have got by so far fairly unharmed. As long as you keep your body in one piece there’s no reason why you can’t keep going.

What tips would you give to any youngsters looking to get into racing?

For a country that isn’t known at all for skiing the UK has so many ski clubs. Most schools have teams you can join and check out races like the School Boys and School Girls. The British Ski Academy in Les Houches [Chamonix] is great if you want to get away to the Alps for a taste of racing while you’re still at school. Remember nobody ever started at the top!

What do ex-racers get up to (aside from hosting Ski Sunday!?) and what do you see yourself doing?

Lots of ex racers get into coaching. Nearly all race coaches were athletes themselves at one point. Others might do things like boot fitting or work as ambassadors for ski equipment companies. I don’t know what I see myself doing in the future, I don’t know if I would be able to coach other kids without wanting to be back training myself.

Next on your calendar is Val Thorens, how are you hoping to place?

Val Thorens is where I'm going to have my first races of this winter so I’m not expecting huge results. I’m going to use the first two days of racing as experience to get ready for the second two days. I’m not expecting personal best results in the races but I want to place around the same as I was doing at the end of last season so I know I’m not moving backwards.

Cara will be reporting for us this winter on her training sessions and races in the Snow Report and Video Report pages, so keep an eye on these for all her latest updates. You can also find out where Cara's races are on our events calendar, and follow her on twitter (@CaraTheSkier) on her facebook page and on Instagram (caratheskier).

Thanks Cara and all the best for a good season!!